Ghosts of Lichfield’s Christmas Past

In this festive blog I look at some of the Christmas’s of Lichfield’s Past, starting with Samuel Johnson, Lichfield’s most famous son, to see what he thought about Christmas.

Samuel Johnson’s Christmas Johnson’s Dictionary of the English Language, published in 1755, defines Christmas as: ‘The day on which the nativity of our blessed Saviour is celebrated, by the particular service of the church’.

Following the publication of the Dictionary Johnson became one of the most notable people in London society and in December 1755, Johnson fell ill at Christmas, and it was reported in London that he had actually passed away. Samuel was very concerned that news of his false demise might reach his mother in Lichfield, so he wrote a letter to his step-daughter, Lucy Porter, on December 30th, informing his family that he was “though not quite well, I am almost well, that I am coming down soon, and I wish you all many happy years.” Clearly this was an 18th century example of Fake News…!

In 1779, Johnson seemed to spend most of Christmas worrying about a watch he had mislaid while visiting Queeney Thrale. Queeney was the daughter of his friends Henry and Hester Thrale, Henry was a brewery owner in London, and Johnson became a perennial guest at their family home at Streatham Park. Samuel writes to Queeney on Christmas Day, signing off: ‘I hope there is no need of telling you, that I wish you all, every good wish of the season, and of every season”. After Queeney fails to respond to his initial letter Samuel send a follow-up letter four days letter in a slightly less than festive spirit: “I wrote to you some days ago to send me my watch which I forgot, and you have not sent it, which is not kind’.

In 1825 the Annual Christmas Ball and supper was held at the George Hotel on Bird Street on Wednesday 4th January – the Lady Patroness was Mrs Pearson and the Stewards were Colonel Miles, Hugh Dyke Acland, William Oakely, and Charles Swinfen, of Swinfen Hall. Mrs Pearson was the wife of John Batteridge Pearson. Although not related to Samuel Johnson, he inherited a number of his personal items, including his walking stick, his writing desk and a copy of Johnson’s dictionary. Legend has it that Batteridge’s maid, believing the dictionary to be unwanted, threw it on to the household fire, destroying it, igniting links to Rowan Atkinson’s Blackadder III, where his servant Baldrick, having a ‘cunning plan’ did exactly the same!
One of the stewards at the Ball was Hugh Acland who was married to Ellen Jane Woodhouse. The daughter of Dean John Woodhouse of Lichfield Cathedral, her first husband had been the Reverend William Robinson, a prebendary at the cathedral. In 1812 William died, having contracted tuberculosis and leaving his widow and two young daughters. The following year, while visiting Bath, one of the daughters, also called Ellen Jane, got too close to a fire in the living room. The flames caught hold of her night dress and she died from the burns that she received. In 1814 Ellen-Jane and her remaining daughter, Marianne, visited London where, after a short illness, Marianne also passed away. In just two years Ellen Jane had lost her husband, and both her young daughters. She was so distraught at the loss of her young family that she commissioned sculptor Sir Francis Chantrey to produce a memorial to her daughters. Ellen Jane’s favourite memory of her daughters was them falling to sleep in each other’s arms and so in 1816 Chantrey produced his ‘Sleeping Children’ sculpture, which in 1817 was moved to the south east corner of Lichfield Cathedral where it remains to this day, one of the most iconic, and moving, sculptures in the cathedral.

The Wolverhampton Chronicle reported in December1845 that there had been a ‘Munificent Christmas Provision for the Poor’, in addition to the annual distribution of beef to the poor of Lichfield, by the private munificence of several of the leading gentlemen, amongst whom were James Palmer, Richard Hinckley, Richard Greene, John Mott, the Rev. William Gresley, and also John Levett, Esquire, who ‘generously gave to be distributed amongst the poorer classes of this city two thousand pounds weight of beef, in quantities proportionate to their respective families. With other donations this will make nearly an aggregate of ten to eleven thousand pounds weight of beef, or more than two pounds per head for the whole destitute population’.
James Palmer and Richard Greene were the business partners in the Lichfield Bank which spectacularly crashed in 1855 when they had to close the doors of the bank to their customers, echoing the scenes in the classic Christmas film, ‘It’s a Wonderful Life’, starring James Stewart.
Richard Hinckley, a solicitor, owned Beacon House, or Beacon Place, an 18th century stately home in the grounds of Beacon Park. Hinckley became the third husband of the afore-mentioned Ellen Jane Woodhouse / Robinson / Acland. Ellen-Jane provided the funds to build Christ Church, on the edge of the Beacon Park estate, in 1847.

Christmas Day at the Lichfield Workhouse was celebrated in December 1894 were there was ‘a complete departure from the ordinary routine. Breakfast proclaimed the festive character of the day, tea and bread and butter taking the place of the porridge, and at 9.30am there was a service in the Workhouse Chapel, the appropriate address being delivered by the Chaplain (the Rev. Hayward). Dinner was served at noon when a liberal supply of roast beef and plum pudding was given, with a pint of beer or stout, to each adult, After the repast an ounce of tobacco and a wooden pipe were presented to each of the men; a packet tea and 1lb of sugar to each woman; and nuts and sweets for the children. An orange was also given to each inmate, two oranges being distributed to each of the inmates in the Infirmary. After the dinner hearty cheers were given in the dining hall for the Guardians, the Chairman, and for the Master and Matron Mr. and Mrs. Williams who spared no trouble to make the day one of enjoyment to the inmates’.

The editor of the Lichfield Mercury provided shoppers with a list of useful gifts in Lichfield for 1920, and added his own message about the true spirit of Christmas. As the country was still recovering from the ravages of the First World War and the 1919 Spanish Flu Epidemic, some of the sentiments have strong similarities to the situation in 2020:
‘These days, when almost everybody has to practise the strictest economy, it is natural that in the presentation of gifts, the givers should be disposed to expend their money in the purchase of something really useful, rather than merely ornamental, to the recipients. Shopkeepers are almost unanimously of the opinion that this year there is little money about and the Christmas trade has not been anything like in extent what was anticipated. At the same time most people desire to maintain their good old custom of sending some little token of good-will to relatives and friends as a reminder that at this season of the year they are still in their thoughts. The gift need not be an expensive one; it is, of course, the spirit which prompts the gift that is of value and that is most appreciated.
For the women there are dressing gowns and jackets, silk petticoats and lingerie garments, fancy linen goods, table centres, perfumes, silver and chocolates, etc. For the gentlemen are ties, socks, fancy waistcoats, slippers smokers’ requisites, while for the children there are pinafores, dresses, scarves and toys of every kind.

Messrs. Winterton and Sons also held their Christmas sale of fat stock in December 1920, when there was an ‘excellent show of all classes of stock; 215 cattle, 600 sheep and pigs were pitched. Buyers were present from London, Manchester, Nottingham, Derby, Birmingham, Wolverhampton, Walsall, and the Potteries, and a sharp trade resulted. The highest price was for a bullock 16 ½ cwt., which realised £94 to Mr. Coates, AIrewas’. A hundred years later Coates the Butchers are still operating on Main Street, Alrewas.

The Lichfield War Memorial had been officially unveiled in October 1920 and the Lichfield Mercury reported that during Christmas a ‘constant throng of family and friends have visited the Lichfield City Memorial, and Christmas wreaths, in memory of the fallen, have in many numbers been placed at the foot of it. The singular beauty of the grounds and the entire design appeal very strongly to the relatives, citizens and visitors, who rightly regard the memorial as in every way an artistic success’.

The former Regal Cinema on Tamworth Street, recently refurbished in to apartments called The Old Picture House, opened in 1932 and in December of that year the cinema laid on a special event for the children of Lichfield: ‘On Saturday morning well over 700 children were entertained at the Regal, a special programme being provided which included Charlie Chaplin in “The Pawnshop” and Leslie Fuller in ” Why Sailors Leave Home.” Special prizes from the Xmas Tree, presented by prominent local tradesmen were given away at the interval, in addition all children received a gift on leaving’

The Lichfield Chamber of Trade Christmas Fayre has been one of the most popular, and festive, events in Lichfield for the last 50 years. The 2020 event, due to Covid-19, was cancelled but in 1995 the Mercury reported that there will be a ‘noisy start for the annual fayre when TWO Town Criers will herald the start of this year’s street Christmas Fayre in Lichfield on Thursday, December 14. Lonzo Atkin will be joined by Penkridge crier Bevan Craddock for the evening when local streets will be closed to traffic while the festivities get underway, market stalls will go up on Market Square and in Bird Street. A traditional pig roast will also be held on Market Square and a wide range of street entertainment Sealed Knot will be marching though the city and Morris dancing and carol singing are all taking place from 6pm onwards. St Mary’s Centre will be conducting trips up the spire and will have Santa installed in his grotto’.

At the 2019 Christmas Fayre town crier Ken Knowles had provided his opening shout and had mentioned the passing of Richard Lewis, the long-standing President of the Chamber, who had passed away earlier that year. In September 2020 Ken Knowles also, sadly, passed away after a short battle with cancer.

I wonder how future generations will record the passing of Christmas in Lichfield 2020, surely one of the strangest Christmas’s in history…we will have to wait and see. In the meantime…

Merry Christmas and a Happy New Year to One and All!

*This blog is dedicated to the memory of Richard Lewis and Ken Knowles, may they both Rest In Peace.

The King of the Criers and Jubilee Albert 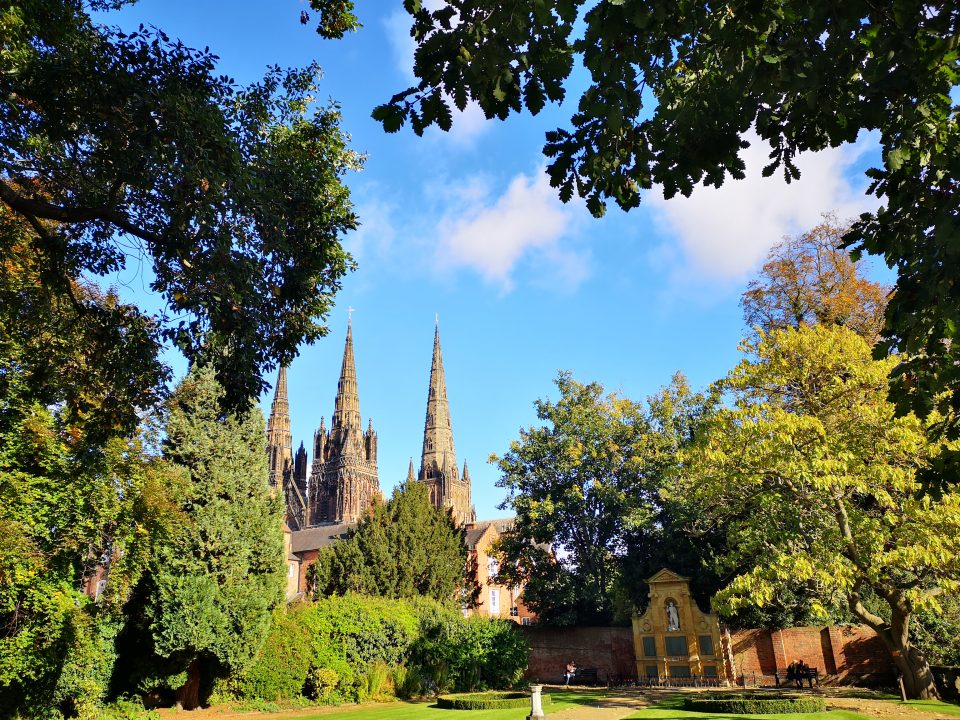 The Lichfield Garden of Remembrance – 100 Years On